You are here: Home / All / October Market Update

“Explosive,” “shock,” and “relief” are some of the adjectives being used to describe the historically massive moves on Thursday as stocks recorded their best session since the early days of the pandemic in 2020. When all was said and done, the Dow Jones Industrial Average and S&P 500 closed out the session up 3.7% and 5.5%, respectively, while the tech-heavy Nasdaq Composite Index skyrocketed 7.4%. U.S. government bond yields also recorded their steepest one-day decline in more than a decade, with the rate on the 10-year Treasury falling 32 basis points to 3.82%.

Why the big moves in the stock market on Thursday?

The Labor Department on Thursday said that its Consumer Price Index increased 7.7% in October from the same month a year ago, down from 8.2% in September, and June’s 9.1% rate, which was the highest in four decades. Prices for most goods and services remained much higher than a year earlier, though many fell from the prior month. The chart below shows the change in prices from July through October:

Rising housing costs remained a strong source of inflationary pressures last month, with rent increasing more slowly in October than in September, but still at more than double the average pace in the decade before the pandemic. Housing rents continued to increase at an outsized pace, rising 0.6% for the month, but that’s below the back-breaking pace set last month where rents posted their largest monthly increases in more than 30 years. Housing rents accounted for nearly half of the overall rise in consumer prices, and we expect it to continue to be a key driver of inflation in 2023-24 because they make up more than 30% of the overall CPI and still have a long way to go to catch up to home prices, which skyrocketed during COVID.

In the two charts below, U.S. rents fell 0.8% in October, the second straight monthly decline. The year-over-year % increase has now moved down for 11 consecutive months after peaking at 18.1% last November. At 5.8%, this is the smallest YoY increase since May 2021.

This 5.8% increase from last year is now below the 6.9% increase in the shelter component of CPI. Why is shelter Consumer Price Index (CPI) still moving higher while actual rents are moving lower? Shelter CPI is a lagging indicator and has significantly understated actual housing inflation over the last two years.

Gasoline prices increased 4% in October from September, reversing three months of declines. The national average price of regular gasoline was $3.81 a gallon on Wednesday, according to AAA. Prices had fallen to as low as $3.67 a gallon in September after peaking in mid-June at $5.02 a gallon.

Food prices rose more slowly in October than in September, with grocery prices up 0.4% from the prior month, the smallest gain since December 2021. Prices leapt 1.1%, however, for sit-down restaurant meals, the sharpest increase since records began in 2001.

Inflation was held down by a handful of categories that declined in October, with one major caveat. That caveat came from the category for medical care services, which declined 0.6%, the largest drop for that category in more than 50 years. But that was due to the way the government tracks healthcare prices and makes adjustments once a year (in October) based on how often people go to the doctor. This drag on overall and core inflation should not be expected to repeat in the months ahead.

Is inflation slowing down? On a year-over-year basis, that looks to be the case. But let’s not break out the champagne bottles yet; inflation is still a major problem for the economy, and a 7.7% annual inflation rate is still far above the Federal Reserve’s long-term target of 2.0%. While it’s too early to tell for sure, there were several positive pieces of evidence in Thursday’s report. 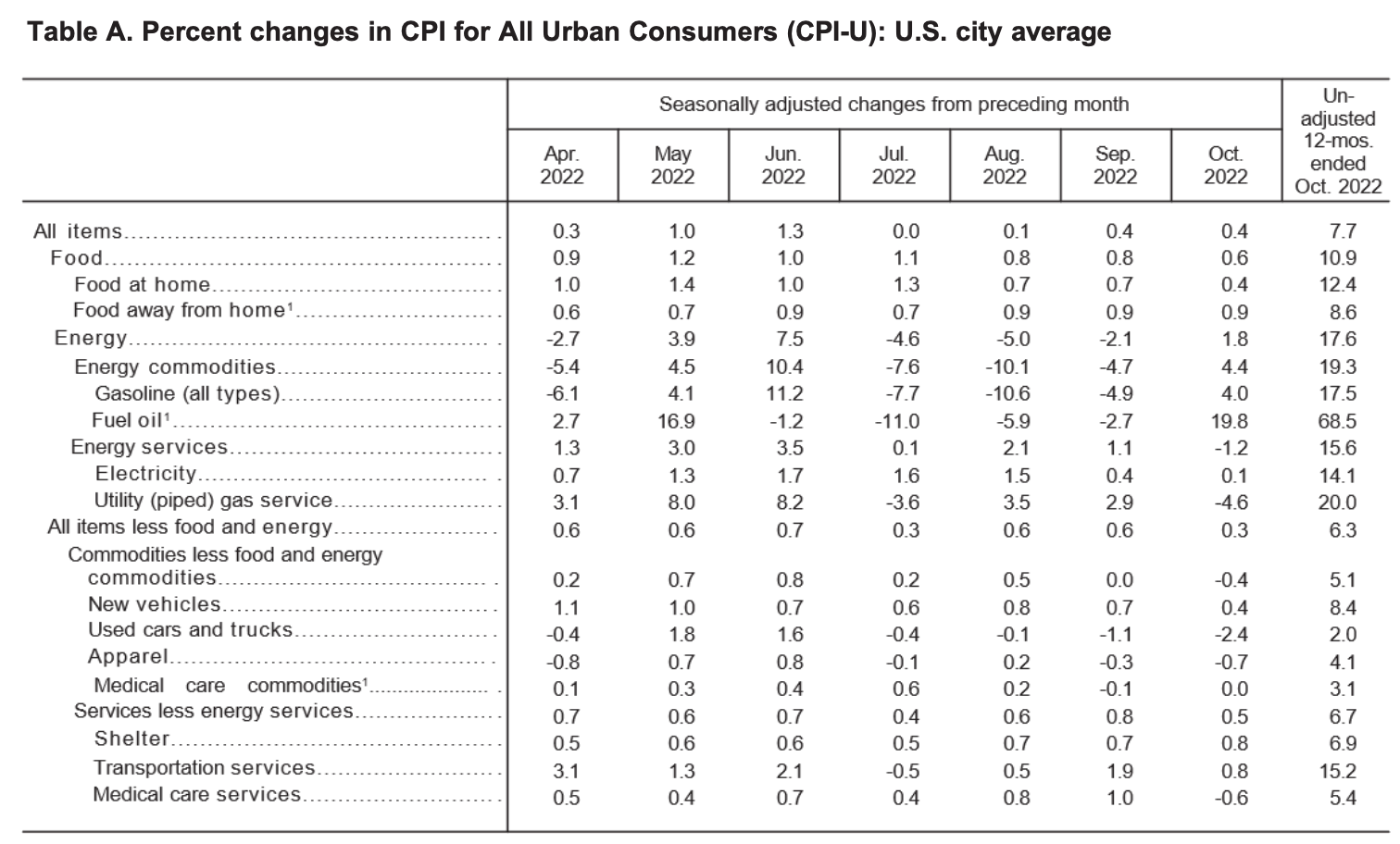 After the release of the November CPI report, we had several Federal Reserve members who, around the time of the opening bell, made bullish comments suggesting the FOMC is increasingly likely to slow the pace of rate hikes next month. Odds of a 75-bps rate hike in December fell to 0%. There were also sizable declines across the Treasury yield curve, including a more than 30-bps intraday drop in the 10-year yield to a new, one-month low well below the 4.00% level.

Now, don’t get me wrong…Fed Chair Jerome Powell is still dead set on raising rates to cool inflation growth. During the most recent policy announcement last week, he said the terminal or peak-rate forecast may need to be adjusted higher…but the pace of increases could slow as soon as December or February. While November’s CPI report may be a welcome sign to the markets, make no mistake, the Fed still has a very long way to go before it can say the inflation scare is over.

But to be clear, we are far from being able to confidently say this broader equity bear market is over from a technical perspective. Zooming out on the charts, this recently accelerating rally strongly resembles the other bear market rallies we have seen so far in 2022, and up to this point there is no reason to believe this is anything different. In the chart below, you will see five different bear market rallies we have experienced only to see the S&P 500 give up those gains and make new lows.

Where Do We Go From Here?

Let me wrap up with RISK MANAGEMENT. For all the reasons outlined above, this is still an environment in which to be cautious. This is why we have held above-normal cash this year to focus more on preservation. The value of the cash in your account will not go down in value (inflation is another story). We have been finding more and more opportunities to take advantage of, more specifically in the fixed income and bond markets, but some in equities as well. We will continue to focus on RISK MANAGEMENT until the market is able to prove otherwise.

Matthew Gaude is an *investment advisor representative and the co-founder of Live Oak Wealth Management, a financial services firm in Roswell, Georgia. He serves the planning and investment needs of corporate employees, those approaching or in retirement, and 401(k) plan sponsors. Working first as a commodity broker and then as a Business Development Manager for a national broker-dealer in previous jobs, he has the insight and experience to help clients understand the complexities of the market and implement strategies to minimize risk. To learn more about Matthew, connect with him on LinkedIn or visit www.liveoakwm.com.

Shawn McGuire is a financial advisor and the co-founder of Live Oak Wealth Management, a financial services firm in Roswell, Georgia. He serves the planning and investment needs of corporate employees, those approaching or in retirement, and 401(k) plan sponsors. He has worked in financial services since 2002 in positions ranging from financial advisor to stock broker and portfolio manager. As a CERTIFIED FINANCIAL PLANNER™ professional, he is trained to help clients with virtually all their financial needs. To learn more about Shawn, connect with him on LinkedIn or visit www.liveoakwm.com.

Any opinions expressed in this forum are not the opinion or view of American Portfolios Financial Services, Inc. (APFS) or American Portfolios Advisors, Inc. (APA) and have not been reviewed by the firm for completeness or accuracy. These opinions are subject to change at any time without notice. Any comments or postings are provided for informational purposes only and do not constitute an offer or a recommendation to buy or sell securities or other financial instruments. Readers should conduct their own review and exercise judgment prior to investing. Investments are not guaranteed, involve risk, and may result in a loss of principal. Past performance does not guarantee future results. Investments are not suitable for all types of investors. Seek tax advice from a tax professional. Neither APFS nor its Representatives provide tax, legal or accounting advice.

Get the latest posts delivered right to your inbox